An unusual trial has recently begun in the Indonesian capital: that of the water privatisation contract awarded to Suez Environnement at the end of the Suharto dictatorship in the 1990s. Fifteen years of private sector management has not brought any improvement to the lives of millions of Jakarta residents and their right to clean water. Last year, the governor of Jakarta announced his intention to return the water services to the public sector. The civil society coalition which initiated the lawsuit hopes to have the initial contract simply cancelled, thus sparing the Jakarta administration a potentially costly buyout. 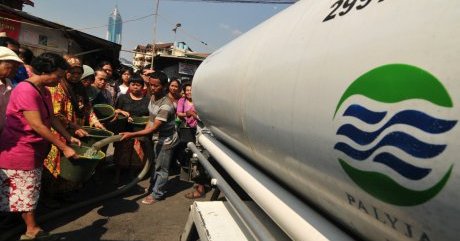 The Jakarta contract is one of the last relics of the great wave of water privatisation in which occurred in the late 1990s in the Global South, and ended in a series of scandals and failures for water multinationals such as Suez and Veolia. It was signed towards the end of the dictatorship period, in particularly dubious circumstances: until now, some of its content is still kept secret. In more than fifteen years, Suez has utterly failed to improve the water system, extend access to water or resolve water quality problems. All the while, the public administration’s payouts and debt towards the private concessionnaire were rising astronomically.

Last year, after a long campaign by residents, unions and civil society organisations, Joko “Jokowi” Widodo, the governor of Jakarta, announced that the water services would come back under public management. He was proposing to buy back Suez Environnement’s shares in the water operator, Palyja. Negotiations have been dragging on since then.

Meanwhile, the Coalition of Jakarta Residents Opposing Water Privatization (KMMSAJ), initiated legal proceedings, including a class-action lawsuit aiming to have the privatisation contract cancelled altogether – potentially avoiding having to pay one single penny to Suez Environnement. According to the claimants, the contract was drawn up illegally and it contravenes the Indonesian constitution’s provisions on basic services. A representative from the Indonesian Commission on human rights said during the trial that the privatisation contract had caused human rights violations.

The activists demand that Joko Widodo not enter into any agreement with Suez before the conclusion of this trial. They fear that the Jakarta administration might unnecessarily pay large sums of money to Suez Environment, or that it might even continue to use the services of the French firm indirectly (a solution which has been suggested by Suez Environment itself). Such problems are frequently encountered in cases of water ’remunicipalisation’ (as has recently occurred in Berlin, Germany).

The issue of the Jakarta water privatisation contract has, for several years, appeared regularly on the Franco-Indonesian diplomatic agenda. It is politically sensitive for France, since GDF Suez, Suez Environnement’s parent company, is involved in several major energy projects in Indonesia. On the other hand, Jakarta governor Joko “Jokowi” Widodo is a poll favorite for winning the presidential elections that will take place in July this year in Indonesia.

For more information about the history of water management by Suez Environnement in Jakarta, read our investigation: Suez in Jakarta: fifteen years of misfortune? (in French).

This article was originally published in French. Translation: Stephen Nichols.