Veolia has left Berlin. The French water giant publically announced this week that it had come to an agreement with authorities in Berlin with regards to selling back its stake in Berlinwasser, the German capital’s water service. Veolia has presented this stepping down as an effect of its “cost-cutting plan”, necessary to pay off its debt. The French press uncritically disseminated this version of events. Behind the PR veil, it’s a completely different story. Veolia actually left the German capital through spite, and Berliners showed them the exit. What happened was in fact a remunicipalisation of the water services, just as in Paris, which was won by Berlin citizens after a long struggle.

Published on 16 September 2013 , by Olivier Petitjean 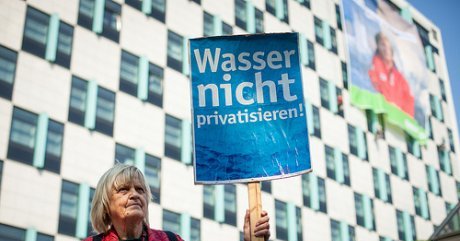 This article was originally published in French and was translated by Gillian Morris.

The contract with Veolia was signed in 1999. It was the biggest Public Private Partnership (PPP) in German history. Veolia partnered up with German energy giant RWE and, in the beginning, with insurance provider Allianz. The details of the contract were initially kept secret, undoubtedly because its clauses offered particularly favourable conditions and guaranteed profits to the private partners.

Faced with a steep increase in water prices, Berliners organised a popular referendum in 2011 (an option provided by the Berlin constitution), despite fierce opposition from town rulers. 660,000 Berlin inhabitants, or over a quarter of the electorate, took part in the vote. An overwhelming majority voted for the disclosure of contracts and the return of the water service to public management. The European Commission and the German Competition Commission also got involved. The latter ruled that the contract with Veolia violated German law, and forced an 18% drop in the price of water!

The City-state of Berlin, today governed anew by a “Grand coalition” between the Social Democrats and the Conservatives, finally gave in to pressure and decided to remunicipalise the service, just as the French capital and several other European cities had done before. RWE made the first move in 2012, by reselling its 25% of shares in Berlin’s water service, despite pressure and legal action from Veolia. The French firm finally relented and sold its remaining share (25%) of Berlinwasser for 590 million Euros, plus a further 54 million Euros from a range of financial operations. The group now omits to mention that it fought tooth and nail against this remunicipalisation.

After water, will electricity be next?

The “Berlin Water Roundtable” (Berliner Wassertisch), coalition of the opponents to water privatisation, celebrated the departure of Veolia, but argues that the sums granted to the French firm are far too large. Militants fear that the cost of this transfer will hang over the management of the service for many years to come. This might prevent a future decrease of water prices, as happened in Paris following the remunicipalisation. Public service supporters believe that Veolia and RWE have already earned enough profit since 1999, thanks to the increase in prices and the drastic reduction in the workforce, maintenance work and investments.

For several years now, Germany has seen a vigorous social movement for the remunicipalisation of public services. On 3rd November 2013, Berliners will vote on another referendum on the return of their energy distribution network to public ownership. Furthermore, the “Berlin Water Roundtable” doesn’t plan to stop there. “Now, we must control our politicians and push them forward”, says Dorothea Härlin, a founding member of the Roundtable. “We must prevent them from running the same type of profit-orientated water management which has prevailed here for such a long time. This is why the Berlin Roundtable has already published a Berlin Water Charter as a participatory instrument in direct democracy, in view of a democratic, transparent, ecological and social water management system in Berlin”.