A new threat to the Amazon: the French oil industry

Oil extraction right in the middle of untouched primary forest, a pipeline project running through indigenous lands... In the Peruvian Amazon, two French oil companies, Perenco and Maurel et Prom, are the object of fierce criticism by local communities, who are worried about the environmental and social impact of future oil extraction. Their projects also pose a threat to several indigenous tribes who refuse any contact with the industrialised world. 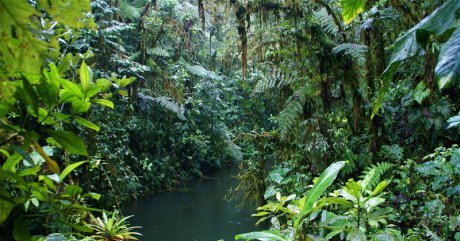 What should an oil industry employee do if, in the heart of the Amazonian rainforest, he chances upon a group of natives in voluntary isolation – these indigenous tribes who prefer not to enter into contact with the outside, “civilised” world? And if these “natives” appear to be threatening? “The indigenous guides [who accompany the employees of the oil company] will shoot flare guns into the air or set off tear gas bombs to alarm them and force them to retreat.” This advice appears, amongst other similarly peaceful suggestions, in the operations manual that the Anglo-French oil company Perenco distributes to its employees in charge of the future development of the “Lot 67” concession. Lot 67 is an oil concession that was granted to Perenco by the Peruvian government. It is thought to have oil reserves equal to 300 million barrels, in the middle of a pristine rainforest. On the other side of the border, in Ecuador, the Yasuni National Park is also sought after for its wealth of oil.

There is an extra problem for Perenco: Lot 67 is home not only to primary rainforest and exotic fauna, but also to people, who have been living there for centuries. Present in the North of Peru since January 2008, Perenco had come under fire in a report published in 2013 by the Peruvian NGO CooperAccion. This report [1] highlights the serious environmental consequences of oil extraction in the heart of a biodiversity hotspot. Oil extraction would be accompanied by the construction of a 207km-long pipeline to connect the extraction zone to the Pacific Ocean.

“Perenco is operating in Peru without having followed the appropriate consultation processes with indigenous populations,” the report states. “The company has conducted several consultations with all the local native population and communities”, responded Perenco’s head of communications, Nicolas de Blanpré. An agreement was indeed signed in 2012 between Perenco, the region’s president and community leaders. “The objective of this plan, explains Mark Anthelm of the company’s communication department, is to help to improve health conditions, to support educational programmes, to develop sustainable development projects and to facilitate local transport, in a way which would mean that the region’s communities can be assisted in the long term and in complete harmony with their values and culture”. A pretty brochure, with photos of smiling children and tranquil tropical villages, provides an inventory of projects led by Perenco. But the compensation seems quite meagre compared to the level of pollution that accidents resulting from the transport of oil barrels on the region’s rivers - principal source of livelihood of thousands of indigenous people - could engender.

A pipeline to the Pacific Ocean

The construction of a pipeline to transport oil to the Pacific would limit these risks - although a Perenco pipeline has been the cause of massive pollution of a laguna in Gabon, in 2008. And, according to CooperAccion, the pipeline will snake across the territories of 20,000 indigenous people, notably the Quechua, who have been neither consulted nor informed about the project. It would also run through the Pucacuro national reserve, which is supposed to be a protected area. What is more, a large zone of 500 metres on both sides of the pipeline’s route will need to be deforested. “Unfortunately, there is no government authority which has the capacity or the competency to assess the cumulative impacts of these projects, in terms of human rights and environmental risks”, deplores Luis Manuel Claps, author of the CooperAccion report. Must the local communities rely solely on the company’s promises?

For its part, Perenco assures it is “working hard with all the relevant Peruvian authorities and in total conformity with the development plan approved by Perupetro (the national oil company) and the mining minister.” Given that the Peruvian government has already agreed to it, the opinion of 20,000 indigenous people in question seems to count for very little. As for the existence of indigenous communities in voluntary isolation, both around Lot 67 and along the route of the pipeline, Perenco asserts that they have had no indication of their existence – although the possibility of a chance encounter with them has been duly considered in their operating manual. (See below the document in question, in Spanish.) [2]

Towards the extinction of indigenous peoples?

“Perenco and the other companies operating in the zone represent a threat to the survival and even the existence of these populations,” says the Peruvian NGO. “They could be wiped out if we force fossil fuel extraction upon their traditional lands.” Given CooperAccion’s criticism, could the project be cancelled? Commercial production must begin in 2013, has maintained the Anglo-French company, which is “proud of its role in helping Peru, developing its sources of energy and advancing towards energy independence”. “Respect for nature is not optional. We think so, don’t you?” claims its brochure.

Perenco is not the only French oil company active in the Peruvian Amazon. Maurel et Prom, a “junior” oil company, is also establishing itself in the North of Peru. The Awajun and Wampis indigenous people inhabiting the zone are worried. In March 2013, one of their representatives, Edwin Montenegro, president of the Regional Organisation of the Indigenous People of the Peruvian Amazon (Orpian), went as far as to travel to Tunisia to challenge the French Deputy Minister for Development, Pascal Canfin, during a meeting at the World Social Forum. The indigenous leader denounced Maurel et Prom for lauching its operations without any preliminary consultation of the local inhabitants having been undertaken by the Peruvian state.

Computers and money to divide up communities?

Maurel et Prom has an oil concession of 6,600 km2 in total, the equivalent of the Ile-de-France region in mainland France. The French company obtained a license for the area in 2012. “Lot 116” is a natural reserve, home to nearly 70,000 indigenous people, the majority of which is strongly opposed to this project. “Over time, it is possible that the population will have to move because of the pollution of their land”, fears Adda Chuecas Cabrera, director of a research centre on the Amazon – the Amazonian Center for Anthropology and Practical Applications -, based in Lima, the capital of Peru.

For now, the company has succeeded in persuading a small community of 400 people to let them carry out their exploratory drillings.“ They have been offered computers and even money”, says Marlène Castillo, an agronomist who recently spent time in the region, “the heads of the communities tell it plainly to their people in the town squares!”. The regional indigenous organisation confirms this accusation: according to them, the French company - associated with a Canadian firm, Pacific Rubiales, for this project – just devises various ways to buy out leaders and authorities. According to Orpian, this is meant to create divisions within indigenous organisations [3]. “Some community members are also employed by the company”, adds Annie Algalarrondo Alvear, who supervises the projects led by Caritas, a catholic NGO, in the Amazon. “It is clear that these employees will try and persuade several members of their community. Which in turn will facilitate their operations.”

“After two years, they are dismissed.”

Divide them to better reign over them: this tactic is used frequently in the extractive sector. “One offers work to some of them. One has them pull out the trunks that are used for oil extraction. Because of this, the indigenous people accept the projects. But after two years, they are dismissed,” says FerminTivir, an Awajun lawyer who specialises in indigenous rights. Sometimes, new diseases spread amongst the indigenous people who are in direct contact with the company’s employees. If one small community seems to have been seduced by the promises of Western-style ‘progress’, it isn’t the case for other indigenous populations. “And yet the project doesn’t only affect their land,” explains Marlène Castillo. “In addition to the 65 communities directly affected, 180 communities will be indirectly affected. They absolutely must be consulted.”

This is precisely the problem. Edwin Montenegro, the indigenous representative who challenged Pascal Canfin, also accuses the company of having influenced internal elections for selecting the president of the Aguaruna Huambisa Council, an indigenous organisation. The company even tried to create its own indigenous organisation! “Maurel and Prom have bypassed the established rules of the communities’ and of indigenous federations,” claims Annie Algalarrondo Alvear, of Caritas. “These rules are based, particularly, on collective bargaining and discussion.” Maurel et Prom, however, claims on its website to have “the utmost respect for regulations and local populations.” But the regulations established by the Peruvian state are too weak to protect local populations from extractive projects: the preliminary consultation system, although integrated into Peruvian law, is not applied. Neither is a ruling adopted at regional level, which makes it compulsory to carry out a consultation.

“If this zone is destroyed, it will affect the entire world”

We contacted Maurel et Prom’s communication department, which stated that they do not have a spokesperson for the subject, “given that Pacific Rubiales manages the project”. This Canadian firm acquired 50% of the shares in the project in 2011. As it is not the official operator locally, Maurel et Prom refuse to make a statement on the matter, even though they still own the other half of shares in the project. One of their key shareholders (why 6.85%), Macif, a mutualist insurance company which claims to act “in favour of a humanist, responsible and altruistic economy”, should perhaps have something to say about that. As for Pascal Canfin, he has still not responded to the questions of Edwin Montenegro, president of Orpian.

In total, 80% of the Peruvian Amazon could be leased to foreign companies for extractive projects. “The Amazon has this image of a territory where there are few inhabitants and where one can extract everything,” explains Adda Chuecas Cabrera, in Lima. “However, this zone, if destroyed, will have an adverse effect on the whole of the Amazon, and therefore the entire world, all of humanity,” she adds. “This triggers economic growth, but not development!” The consequences of extractive projects could be disastrous. Peru is already the third most vulnerable country in the world in terms of potential climate disruptions.

This article was originally published in French. Translation: Rebecca Ballard.

[2] Extracts from the report in English are available on Survival’s website.