“The true measure of any society can be found in how it treats its most vulnerable members,” Gandhi said. And the UK is not measuring well. The government is failing society’s disabled, ill, and most vulnerable. The Work Capacity Assessment (WCA), which is being carried out by the French firm Atos Healthcare on behalf of the British government, is proving to be an ineffective, costly process which is pushing many to the verge of despair.

Published on 28 January 2014 , by Jennifer Kennedy 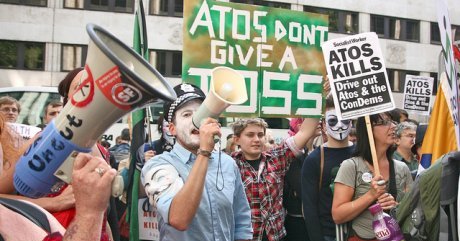 In 2010, the UK coalition government announced plans to reassess all Incapacity Benefit (IB) claimants. Those deemed capable of work are now being put onto Job Seekers Allowance (JSA). IB is being scrapped and any claimants who would have been eligible for it are now receiving Employment and Support Allowance (ESA). In 2011, the government initiated the reassessment of all IB claimants using the controversial WCA and the company tasked with carrying them out is Atos Healthcare. The French-owned company currently receives £110 million-a-year from the Department of Work and Pensions (DWP) to carry out the assessments.

The documentary’s release coincided with the Lichtfield Review, the fourth annual Independent Review of the Work Capability Assessment, which was published earlier this month. The review found that there “remains considerable concern that the current system is not operating as well as it might for [people with mental problems] and that may be reflected in the higher rate of decisions being overturned at appeal for people with a mental health condition”.

The current system’s inability to sufficiently assess the needs of claimants with mental health problems is far from the only criticism levelled at Atos and the WCA. For example, Atos assessors have been accused of falsifying or twisting information in order to deny ESA in a bid to reach government targets - a claim the DWP and Atos vehemently deny. In 2012, the BBC broadcast a Panorama documentary about the new WCA called Disabled or Faking it? in which the former employment minister, Chris Grayling, said: "there are no targets anywhere in the system." But, when the BBC asked to see the DWP’s full contract with Atos, the government refused.

Last year, several former employees have also come forward to tell their story. Dr. Greg Wood, a former Atos assessor, told the BBC: "I was instructed to change my reports, to reduce the number of points that might be awarded to the claimants. I felt that was wrong professionally and ethically.” Another whistleblower, Joyce Drummund, a former Atos Nurse, told a Scottish newspaper, the Daily Record that she was instructed to mark down claimants she knew were unfit for work

Indeed, Atos and WCAs are rarely out of the news and there is no shortage of reports describing how the system is failing people. According to an article in The Mirror published on 28 December, an inquest heard how Tim Salter, “a desperate agoraphobe” who had failing eyesight, killed himself after Atos deemed him fit for work. The inquest also revealed how the 53 year-old-man “was left penniless because his benefit had been slashed”.

The Daily Mirror’s Ros Wynne Jones, after writing about Dr. Woods in August, received “a deluge of personal horror stories about the WCA”. One reader told Wynne Jones that despite suffering from a chronic condition that left her “barely able to move,” she was deemed fit for work.

Earlier this year, while researching for another article about Atos, I asked people to contact me with their experiences of Atos and the WCA. Several people emailed. One claimant, who wished to remain anonymous, told me he had been sick for seven years, but has now been found ineligible for Employment Support Allowance. The man, who suffers from mental health problems and a spinal disease, claimed his Atos report was “full of lies” and “ignored facts” adding that “the whole system is set to fail you”.

Another claimant, who also wanted to remain anonymous, said that Atos were not only letting people down by finding them fit for work, when they are clearly not, but that they were also keeping people in “financial limbo.” The young woman who suffers from a chronic condition is on the basic ESA entitlement for the under 25s, £56.80 a week, which she said barely covers her expenses. The claimant could be eligible for the full amount of up to £106.50. But she needs an assessment and, when she contacted me in September, she had been waiting since February for one. The woman said she had telephoned Atos several times only to be told “we’re getting to you” but there is a “back-log”. “I feel incredibly let down by this system,” she said.

Atos, who has been slammed by employment and disability rights groups, has also come under intense scrutiny for carrying out assessments described by the British Medical Association as “not fit for purpose.” And at the beginning of 2013, during what The Guardian described as a “powerful Commons debate that united politicians from all parties,” MP’s described instances where seriously sick claimants had been deemed “fit to work.” Some claimants had later died. A month later, a Public Accounts Committee, formed of MPs and headed by Labour MP Margaret Hodge, published a report criticising the DWP’s contract with Atos. Yet, it continues to be used and there appears to no end to the incompetency. For example, two claimants told me that due to a series of confusing errors they had had their benefit payments stopped.

Vicky Wombwell who suffers from Fibromyalgia was due to have an assessment and Atos was notified that she required a home visit, as she had done in the past, because the assessment centre was not accessible to her. Vicky said that a few months later she received a letter asking her attend an assessment at one of Atos’s centres, which confused her. But what was more worrying she said, was that the appointment date was for several days prior. Vicky’s ESA was stopped automatically because she was marked as ‘missing an appointment’. As a result of the ESA being stripped, her housing benefit was stopped, putting her into arrears. When she contacted me, Vicky was still in the process of trying to rectify the situation by writing to Atos. And the whole process has caused lot of needless anxiety, worry, and stress.

Another woman who wanted to be referred to as Ellen had a similar story. Ellen has a number of cardiac conditions and had been claiming incapacity benefit since 2004. She had received the highest care component of Disability Living Allowance (DLA) and was considered unfit for work. In 2011, she says her DLA was renewed for five years based upon medical evidence which showed that she required supervision, help, and support around the clock.

In February 2012, Ellen received a letter from the Department of Work and Pensions stating that she was being transferred from Incapacity Benefit to ESA. She was then contacted by Atos to attend an assessment centre but like Vicky, it was unsuitable. Her daughter contacted Atos who said they would be in contact and they then sent a letter. But according to Ellen, the appointment time and place was exactly the same as before. Exasperated, her daughter called Atos again to arrange a home visit and she subsequently received a home visit for July 2012. But Ellen said that the doctor failed to turn-up. Three days later she received a letter stating that the appointment would be cancelled.

Ellen said that she waited and waited but by August she had not heard anything from Atos. Desperate, she asked her local MP to get involved and Atos responded by allegedly denying ever having made an appointment for a home assessment.

Ellen’s Kafkaesque nightmare continued. She said that there were then a series of failed appointments, which she blames Atos for, explaining that there won’t be another appointment. “I simply cannot take the stress, pain and fatigue that Atos are causing over and over again… There can be absolutely no doubt that I am entitled to ESA, even Atos have admitted in their response to one of my many complaints that they had enough evidence from the outset to find me unfit for work, which begs the question of why they would do this?” she said.

The system is clearly not working. And it is also proving to be extremely costly According to figures shown to the Labour Party, tribunal hearings for ESA has trebled from £21 million 2009/2010 to £66 million in 2012/2013. And in August, Sarah Lambert, head of policy at the National Autistic Society (NAS), told the Independent that “The figures show what the NAS has long been arguing – the current system is producing too many wrong decisions which are inevitably costing more to the taxpayer”. The DWP‘s response was to tell the paper that the increase in appeals was “completely unsurprising” because the number of work capability assessments had also risen.

Time and time again, all evidence is pointing the fact that the coalition’s campaign to get more people off of disability benefit and into work is failing. It is costing more. And it is causing suffering to those that it should be protecting, driving some to suicide while others are being forced to live hand to mouth. But, as many of claimant who contacted me, wanted to make clear, they would work if they could.

Vicky Wombwell said that being disabled is not a choice she would have made for herself: “Not in a million years. For those who think it is the soft option, an easy way to get out of working and contributing to society, I would ask you to live a day as I do, and still manage to keep the screams on the inside.”

This article was initially published by OpenDemocracy under a Creative Commons Attribution-NonCommercial 3.0 licence.