Auchan: some promises, but no compensation for Bangladeshi workers

Six months ago, the Rana Plaza building and its five textile factories collapsed, resulting in 1.133 deaths and even more injured. One of the brands for which they were working is Auchan, but the firm still refuses to contribute to the compensation fund. Because of this, the company was nominated in the “Dirty hands, deep pockets” category of the 2013 Pinocchio award. This award is organised by Friends of the Earth France to “name and shame” companies with poor social and environmental records [1]. 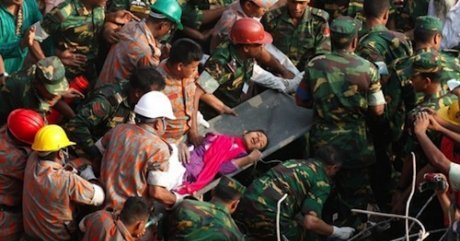 This article was originally published in French. Translation : Mathilde Balland.

21 year-old Nazma is one of the survivors of the Rana Plaza accident. On April 24 – the day the building collapsed and claimed the lives of hundreds of people – she was on the eighth floor making clothes for several major occidental brands. But the father of her young child (born after the tragedy) was not so lucky. He was working on the tenth floor, and he did not survive. The young woman received a small amount of money, thanks to the international organization ActionAid. Some of her medical bills were reimbursed and she received enough money to pay her husband’s funeral. Today, she is still waiting for compensation by the occidental brands, but for how long?

It is hard to say. “Things are progressing, although very slowly” declares Vanessa Gautier from the French NGO “Peuples solidaires”. In September, a new meeting was held in Geneva under the auspices of the International Labour Organization (ILO). Only nine of the 29 companies invited were there to discuss their possible participation in the compensation fund which was created to help the victims of Rana Plaza and their families. “Camaïeu was the only French brand there, adds Vanessa Gautier. Even though Auchan acknowledged that part of its production was informally subcontracted to a Rana Plaza factory by one of its Bangladeshi suppliers, the brand remains silent about its participation in the compensation fund.”

Auchan: a victim of informal subcontracting?

45% of the €54 million fund – €23 million – should in theory be brought by the multinational brands involved. The Government of Bangladesh, the Bangladesh Garment Manufacturers and Exporters Association and the owners of the factories in the Rana Plaza building will pay the rest. To make up for the delays in coming up with an international agreement on this compensation between the contracting companies, some local NGOs made several emergency payments. The Irish group Primark also provided emergency aid for several victims.

Like Carrefour and more than a hundred other large European and North American clothing brands, Auchan finally signed the Bangladesh Fire and Safety Agreement last June. The group, owned by the Mulliez family (3rd richest family in France), vowed to fight “against undeclared subcontracting in the garment industry” in Bangladesh, where the group intends to continue sourcing. “It is not a question of better supervision of subcontractors, like Auchan claims, it’s about having a purchasing policy with a fairer relationship with suppliers, comments Vanessa Gautier, Auchan says it is a victim of wild subcontracting but to us, it is still responsible, because of its procurement policies”.

The company, who has refused to answer our questions about the compensation, committed to organizing “unexpected on-site visits”. “This will be come on top of a number of social and quality controls already in place. The first production inspector will be ready in September 2013 in Bangladesh”, explains the group, without taking stock of the current “social responsibility” policies of Western brands, that did not prevent the Rana Plaza tragedy. “Our partners in Bangladesh haven’t noticed any change yet”, reacts Vanessa Gautier.

Perhaps we will fond out more at the end of the 2014 first quarter, at which time Auchan has committed to communicating on the progress of the implementation of its plan of action, which is duly overseen by the Group’s Internal Audit team!