Eight years and three months in prison. That’s the sentence demanded by Spanish Public Prosecutors for eight Airbus trade unionists who took part in a demonstration in front of one of the European company’s factories. A demonstration which degenerated into street fighting with the police. In the eyes of national trade unions and of IndustriALL, the international trade union confederation, this amounts to an attempt to criminalise the labour movement and the right to strike, as part of a campaign of the Spanish government to diminish the influence of trade unions and suppress workers’ rights.

Published on 19 February 2014 , by Olivier Petitjean 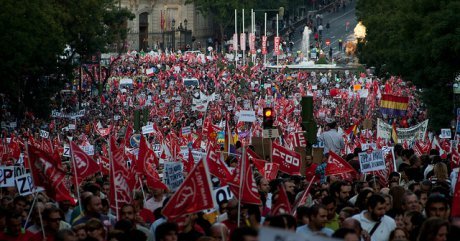 The eight prosecuted trade unionists took part in the general strike on 29th September 2010, intended to protest against a range of austerity measures implemented by the Spanish government at the time. A demonstration took place in front of the Airbus (formerly EADS) factory in Getafe, in the suburbs of Madrid. Here, as elsewhere in the country, the event was marred by confrontations with the police force, which left nine demonstrators with injuries. The trade unionists are today being charged with “attacking the authorities,” “injury” and “attacking the freedom to work.” Trade unions are challenging these allegations, in which they see a political settling of scores staged by the Spanish Ministry of Justice.

The Spanish Public Prosecution revealed its indictment to be eight years and three months in prison. Spanish trade unions and IndustriALL, the industry’s international trade union confederation, denounce this indictment as an unprecedented challenge to the right to strike. “This clearly excessive prison sentence called for by the Public Prosecution is totally exaggerated in relation to the alleged charges and raises the threat of the right to strike becoming a criminal offence in Spain,” asserts Jyrki Raina, IndustriALL’s secretary general. For their part, Spanish trade unionists claim this is an attempt at repression "unprecedented since the Franco dictatorship,” which illustrates the social and political “regression” currently underway in Spain [1].

Read IndustriALL’s press release with a link to the letter to the general prosecutor of the Spanish State.

N.B.: The Spanish State is a shareholder of Airbus, holding approximately 4% of the company’s shares.

This article was originally published in French. Translation: Stephen Nichols.