Mediapart publishes a ranking of the 10 companies that produced the most greenhouse gas in France in 2012. France’s main carbon polluters are, by far, ArcelorMittal, EDF and Total. Surprisingly, the ranking lines up to a large extent with the list of the companies that have hoarded the most free carbon credits thanks to inadequate European carbon regulations. 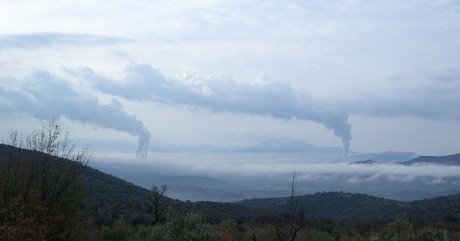 In the list of the 10 companies that produced the most greenhouse gas in France in 2012, one finds a steel industry giant (ArcelorMittal), Big Oil (Total and ExxonMobil), energy producers (EDF, E.ON and GDF Suez) and cement manufacturers (Lafarge and Italcementi/Calcia). Jade Lingaard and Arthur Pivin, authors of the article, stress the fact that the figures they publish (collected from European carbon emissions data) do not include the greenhouse gas emissions of these companies outside of France, nor the ones "externalized" by France through industrial relocation.

The authors also point out that it can be surprising, at first sight, that EDF has such a high position in terms of greenhouse gas emissions, since it produces electricity that is mainly of nuclear (and hydroelectric) origin. But the company still runs a few coal- and oil-fired power stations - which are to be closed in coming years and replaced by gas-fired units.

They also stress the puzzling similitude between the list of the largest French carbon polluters and the list of the companies that have made the most virtual profits recently thanks to the European system of "carbon credits". Those firms benefited from large amounts of free carbon credits and, because of the outbreak of the global economic crisis, they have not had to use them all. This paradox highlights the deep flaws of the current European carbon credit mechanism.

Finally, it should be borne in mind that the industry only counts for one third of French greenhouse gas emissions, before transports (27%) and agriculture (19%).

The full article (in French) is available on the Mediapart website (subscription).

This article was originally published in French. Translation: Ludmilla Pinot.