While claiming to be ’environmentally responsible’, BNP Paribas continues to finance the climate-killing coal industry

“Responsible” but still contributing to climate change? In recent months, BNP Paribas has engaged in a large-scale media campaign aimed at presenting itself as a responsible, environment- and climate-conscious bank. Yet its financing of megaprojects –notably in the coal industry- has continued uninterrupted.

Published on 29 October 2013 , by Olivier Petitjean 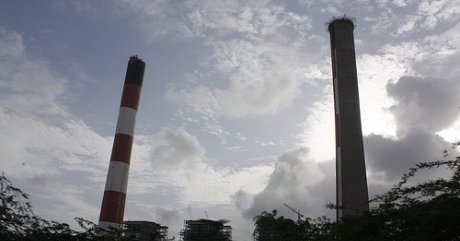 Publicity campaigns, organising forums and conferences on climate change, creating four dedicated ’think tanks’... “In 2013 BNP Paribas brought out the big guns to promote its new commitment to being a responsible bank’”, according to the environmental group Friends of the Earth. At best, these initiatives reveal a sponsorial logic, not true corporate social responsibility. The premier French bank has not fundamentally altered its practices in terms of ethics and financial regulation or taking account of its environmental impact.

BNP Paribas continues to actively finance the coal industry – alone responsible for a third of all global greenhouse gas emissions – in South Africa or the United States, along with other “dirty” forms of energy production such as the exploitation of Canadian tar sands [1]. As investors, banks- like all other private or public financial institutions- have a direct responsibility towards the energy transition and the fight against climate change. As one of the world’s major banks, BNP Paribas regularly plays a decisive role in raising or securing the necessary investments to launch potentially polluting megaprojects such as mines and thermal power stations.

This is the case in the Tata Mundra coal-powered plant on the cost of Gujarat, India. BNP Paribas is one of only two banks involved, along with Indian banks and various international backers which include the World Bank. With a capacity of at least 4000 megawatts, Tata Mundra will be the main plant in a series of 16 tellingly named the “Ultra Mega Power Projects” (UMPP). In addition to carbon emissions, the project risks destroying the coastal environment and the livelihoods of local communities. Tata, the Indian multinational, and its political allies have chosen to force through the project, without consulting the populations affected or undertaking the legally required impact assessments. A World Bank internal inquiry brought to light numerous violations of environmental and social regulations which theoretically apply to projects financed by the Bank (and which are also applied by BNP Paribas). It appears, however, that this has been disregarded.

In 2010, BNP Paribas lent its financial backing to two coal-fired power station megaprojects in South Africa, Kusile and Medupi, in spite of a global activist campaign. Still under construction, the power stations will be among the most important in the world in terms of capacity, but also in terms of carbon emissions .

Independent information on corporate power is critical, but is has a cost.

In 2011, the BankTrack network published a rankings of the banks which have most contributed to greenhouse gas emissions through to their involvement in mines and coal-fired power stations. BNP Paribas was placed eighth in the global ranking and in first place among French banks. In 2010, the Belgian NGO, Netwerk Vlaanderen (now known as FairFin), also denounced BNP Paribas’ involvement in the coal sector, along with that of the insurer AXA. That same year, the bank also appeared at the head of the first carbon rankings of French banks, drawn up by Friends of the Earth and the consultancy firm, Utopies. According to their rankings, BNP Paribas held first place in terms of total global emissions, with 1360 million tons of carbon emitted each year, and second place- behind Crédit Agricole - in terms of carbon emissions per Euro invested.

Owing to this great gap between discourse and reality, BNP Paribas is nominated this year for the ’Pinocchio Awards’ along with eight other French multinational companies. It is a list which also includes Société Générale, for its involvement in AlphaCoal, a coal mine megaproject in Australia which poses a direct threat to the Great Barrier Reef .

BNP Paribas officially responded to Friends of the Earth on the subject of this nomination, justifying its media campaign through its desire to “contribute to the public debate on the changing role of banks”. The bank further asserts that coal is an indispensable energy source in guaranteeing the energy needs of developing countries and points to having putting in place, in 2011, a “coal policy” to ensure that it finances only “technologies providing the greatest energy efficiency and minimal environmental impact” (read the bank’s full response here - in French). Friends of the Earth, in their “response to the response”, note that BNP Paribas comments on the number of coal-fired power stations which it has not financed and on the number of tons of coal which have thus been “avoided”, yet it remains silent on its confirmed financings and their impact in terms of greenhouse gas emissions. Moreover, its decision to continue to focus on coal goes against recent decisions taken by international backers such as the European Investment Bank (EIB).

The Pinocchio Awards are organised by Friends of the Earth in partnership with the Centre of Research and Information for Development (CRID) and the NGO, Peuples Solidaires/Action Aid, along with Radio Mundo Real, Basta ! and the Multinationals Observatory. Voting is open until 18th November 2013.

This article was originally published in French. Translation: Darius Barik.

[1] Read Banktrack’s page on BNP Paribas and its ’dodgy deals’.