From Brittany to Limousin, mining companies are coming back to France

It almost resembles a gold rush. Dozens of requests for licences have been filed by several mining companies with Australian, Singaporean and Egyptian capital to explore the French subsoil and its metal ores. A first wave of exploration has been authorised in Sarthe. The excitement over commodities is spreading to other regions, without any certainty that local communities will be consulted or that these mining activities will be kept strictly supervised, considering past pollution issues. 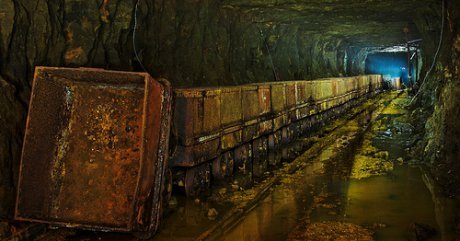 The last large gold mine in France, at Salsigne in the Massif Central’s Montagne Noire, to the North of Carcassonne, was closed in 2004. The same year as the last coal mine in Lorraine, La Houve. The drilling machinery died. Darkness regained the tunnels after the last lifts were raised from the depths. Has the country definitively turned the page on its mining history? Ten years down the line, geologists and mining companies are once again interested in the French subsoil; and not just for gas or shale oil.

There are indeed some mines left on French territory, but far from mainland France itself: in French Guiana for gold and on New Caledonia for nickel. Eramet, the last large French mining company and the world’s seventh largest producer of nickel, is now taking an interest in Indonesian deposits, with its giant Weda Bay mining project. All this seems very remote for French public opinion, as are deforestation and the risks of pollution associated with extractive activities.

But mining fever is coming back to France and if the inhabitants of Sarthe, Creuse or Côtes-d’Armor want to avoid being victims of similar problems, they will soon have to take an interest in what’s happening in Peru or Zambia. For politicians, this fever is boosted by the prospect of being able to produce metals and gold that are “made in France”. On June 18th, 2013, Arnaud Montebourg, Minister for Industrial Regeneration, granted Variscan Mines permission to explore Sarthe and Mayenne. This so-called “Tennie” licence – “exclusive licence for mining research” – covers 17 municipalities over 205 km2. It had been over 30 years since any exploration licence had been granted in mainland France.

Who is Variscan Mines? They are an Orléans-based company, founded by two former members of the French Geological Survey (BRGM) and financed by sources from Australia (including an HSBC subsidiary) and New Zealand, and investment funds based in Singapore (a tax haven). The company expects to invest €11m to evaluate the potential of metal ores (copper, zinc and lead) as well as gold or silver resources in the Pays de la Loire region. Variscan is also looking beyond this, to Bourgogne and Brittany, where the company has also identified “potentially profitable” ores and filed requests for similar licences.

In Creuse, another company, Cominor, is also seeking a licence for undertaking gold, copper, silver, zinc and tin exploration. Cominor is an affiliate of the La Mancha Resources group, based in Canada, the legal haven of transnational mining companies. La Mancha was sold on by Areva in 2012 to the Egyptian multimillionaire Naguib Sawiris (the 189th richest person in the world). Suffice to say, the inhabitants of Sarthe or Creuse have reasons to worry about the environmental consequences of this sudden gold fever, especially as the people in charge will be far away, potentially uncontactable in cases of pollution.

A favourable situation for mining companies

Why this renewed interest in metal ores previously considered to have been exhausted by the Industrial Revolution and the Trente Glorieuses? With surging prices for commodities related to an expected shortage of raw materials in the future, forsaken metal ores are now becoming profitable again, as is the case with fossil fuels. This is particularly true for copper, a tonne of which currently changes hands for $7000, far above with its price ten years ago – $1700 per tonne. But it is also the case for gold, which has become a safe haven investment during the financial crisis: an ounce today is worth $1400, four times more than in 2003.

On top of this surge in commodity prices, the French political situation is also favourable to mining companies. Since October 2012, Arnaud Montebourg has highlighted his wish to “give France a new ambition: to become once again a country where we can run mines, as a number of other European countries do”. What is more, as an internal document of Variscan insists, “the mining code is under revision”. In other words, the reform could be accommodating, especially if, given the convergent interests for “a mining revival”, top companies like Total or GDF Suez and the “juniors” like Variscan and Cominor promote their point of view effectively.

The industry has its fair share of arguments. Not only will mining operations create jobs, they promise, but tomorrow’s mining will be “green”: thanks to geothermics it will use its own “positive energy” and will be capable of “clean production”. All this whilst extracting “HQE metals” (high environmental quality metals), as outlined in the “Strategy for mining exploration in France in the 21st century” presented by Variscan in Paris at the start of 2012 at the École Supérieure des Mines. According to its ardent in-government promoter, Arnaud Montebourg, mining activity constitutes an “important source of investment, activity and employment in France which cannot be outsourced”.

In Sarthe, if exploration turns out to be fruitful, 150 mining jobs could be created, as well as another 500 jobs for plumbers or electricians, in five years’ time, insists Variscan. But recruitment which will not be necessarily local, given the required skills, argues the ALDEAH (alternatives to extractivist and anthropocentric development) group, opposed to extractive industries. Mining operations also risk “destroying pre-existing jobs in sectors directly affected by their environmental impacts”, such as agriculture or tourism.

Will promises of job creation and “green” metals pretense be sufficient so convince local people? Mining activity over the last century has left seemingly indelible marks on the environment. On 21st July, inhabitants of Tennie, at the heart of the exploration zone, staged protests as they feared that history would repeat itself (see video). They remember the “large bin bag of cyanide left over after the extraction of gold at Rouez”. Between 1989 and 1992, Elf Aquitaine, later taken over by the Total group, has mined deposits of gold and silver at Rouez-en-Champagne, leaving some 300,000m3 of land saturated with cyanide.

Cyanide, arsenic and a financial hole

In Limousin, about 20 kilometres from the site where Cominor wishes to search for gold, lies the former gold mine of Châtelet, which was in operation until 1955. According to L’Usine Nouvelle, “more than 500,000 tonnes of waste, produced by the treatment of the ore and stored in the open air, are contaminated with arsenic. All this at the heart of a Natura 2000 area. With every thunderstorm, run-off waters loaded with arsenic pour into the Tardes river below.” The residents have had to fight a long battle, and the French State has paid out nearly €4.5m of public money for the site to be cleaned up half a century later.

The gold mine in Salsigne, in the Aude department, has also left a gaping ecological wound and a deep financial hole. After various changes in ownership and a governement-led bailout attempt which cost the taxpayer €76m, the group operating the site was liquidated. The site still remains to be cleaned and restored; even today, the former mine discharges 3,650kg of arsenic into the Orbiel river [1]. The bill to clean and restore the site would be nearly €50m, according to the French Court of Auditors’ 2004 estimate. This will be paid for mainly by the State, via the French Environment and Energy Agency (ADEME), whereas the last company operating in Salsigne was a subsidiary of mining companies... from Australia.

The memory of Salsigne’s environmental legacy seems to have no effect on government officials. In Limousin, the Regional Health Agency, the Heritage Services, the Regional Directorate for the Environment, the General Council of the Environment and the regional Prefect all gave their approval to the so-called “Villeranges” licence application filed by Cominor. This is in spite of “the existence of double Natura 2000 area” and “major biodiversity issues ”, as acknowledged in the official document. As far as public consultation is concerned, it has taken place… in the middle of summer! Citizens were invited to address their observations by e-mail or post between 24th July and 4th September. “It’s not about gaining the public’s approval, but at the most about finding out their opinion,” bemoans ALDEAH, who sees “a profound contempt for democracy” at work [2]. Arnaud Montebourg has already been challenged by Françoise Dubois, Socialist Member of Parliament for Sarthe in March 2013 on the need for greater “transparency when granting mining licences.”

France is not the only European country affected by this new gold rush. In two years’ time, Greece could become Europe’s leading producer of gold. Canadian and Australian “juniors”, Eldorado Gold and Glory Resources, are digging in four mines in the north of the country. In Spain, one of the largest European open-air copper mines, in the heart of Andalusia, could be restarting in a year. Its new owner, the Canadian producer Emed Mining, is planning to extract 37,000 tonnes of copper concentrates - doubling the country’s production for the first quarter of 2012.

In Romania, the Canadian company Gabriel Resources intends to excavate the Rosia Montana site in Transylvania, which is said to hold the world’s third largest deposit of gold. But its opening would spell destruction for four villages, 1,500 hectares of land and four mountains. On 9th September 2013, 15,000 Romanians took to the streets to voice their opposition to this mining project, which would also entail the use of large quantities of cyanide. This is reminiscent of similar protests in Peru against the Conga Project, an immense open-air gold mine.

This mining revival, despite all the usual references to “sustainable development” by those seeking to run the mines, seems difficult to reconcile with ecological transition. Alain Deneault, Canadian journalist and co-author of the investigative book Paradis sous terre [Underground Paradise], warns that “gold extraction is madness: hundreds of litres of water a second with the use of toxic chemicals which produce arsenic. As for royalties, if ever it was deemed rational to allow such mining projects, they must be calculated at the source, as soon as the ore is extracted, and not only on the nominal profits”.

Mining is “compatible with respect for the environment,” claims Arnaud Montebourg. If tomorrow, future mines in Sarthe, Creuse or Côtes-d’Armor cause serious pollution, will the French State be able to side with citizens and employees, and hold their owners accountable, be they in Sydney, Singapore or Toronto?

This article was originally published in French. Translation: Rebecca Ballard and Stephen Nichols.

[2] Update: On 18th November 2013, the French Minister for Industrial Regeneration granted a mining licence to the company Cominor to search for several metals in the Creuse department.